Marisa Silver dazzled and inspired readers with her critically acclaimed The God of War (a Los Angeles Times Book Prize finalist), praised by Richard Russo as "a novel of great metaphorical depth and beauty." In this elegant, finely wrought new collection, Alone With You, Silver has created eight indelible stories that mine the complexities of modern relationships and the unexpected ways love manifests itself. Her brilliantly etched characters confront life's abrupt and unsettling changes with fear, courage, humor, and overwhelming grace.

In the O. Henry Prize-winning story "The Visitor," a VA hospital nurse's aide contends with a family ghost and discovers the ways in which her own past haunts her. The reticent father in "Pond" is confronted with a Solomonic choice that pits his love for his daughter against his feelings for her young son. In "Night Train to Frankfurt," first published in The New Yorker, a daughter travels to an alternative-medicine clinic in Germany in a gambit to save her mother's life. And in the title story, a woman vacations in Morocco with her family while contemplating a decision that will both ruin and liberate them all.

From "Temporary," where a young woman confronts the ephemeral nature of companionship, to "Three Girls," in which sisters trapped in a snowstorm recognize the boundaries of childhood, the nuanced voices of Alone With You bear the hallmarks of an instant classic from a writer with unerring talent and imaginative resource. Silver has the extraordinary ability to render her fictional inhabitants instantly relatable, in all their imperfections. Her stories have the singular quality of looking in a mirror. We see at once what is familiar and what is strange. In these stirring narratives, we meet ourselves anew. 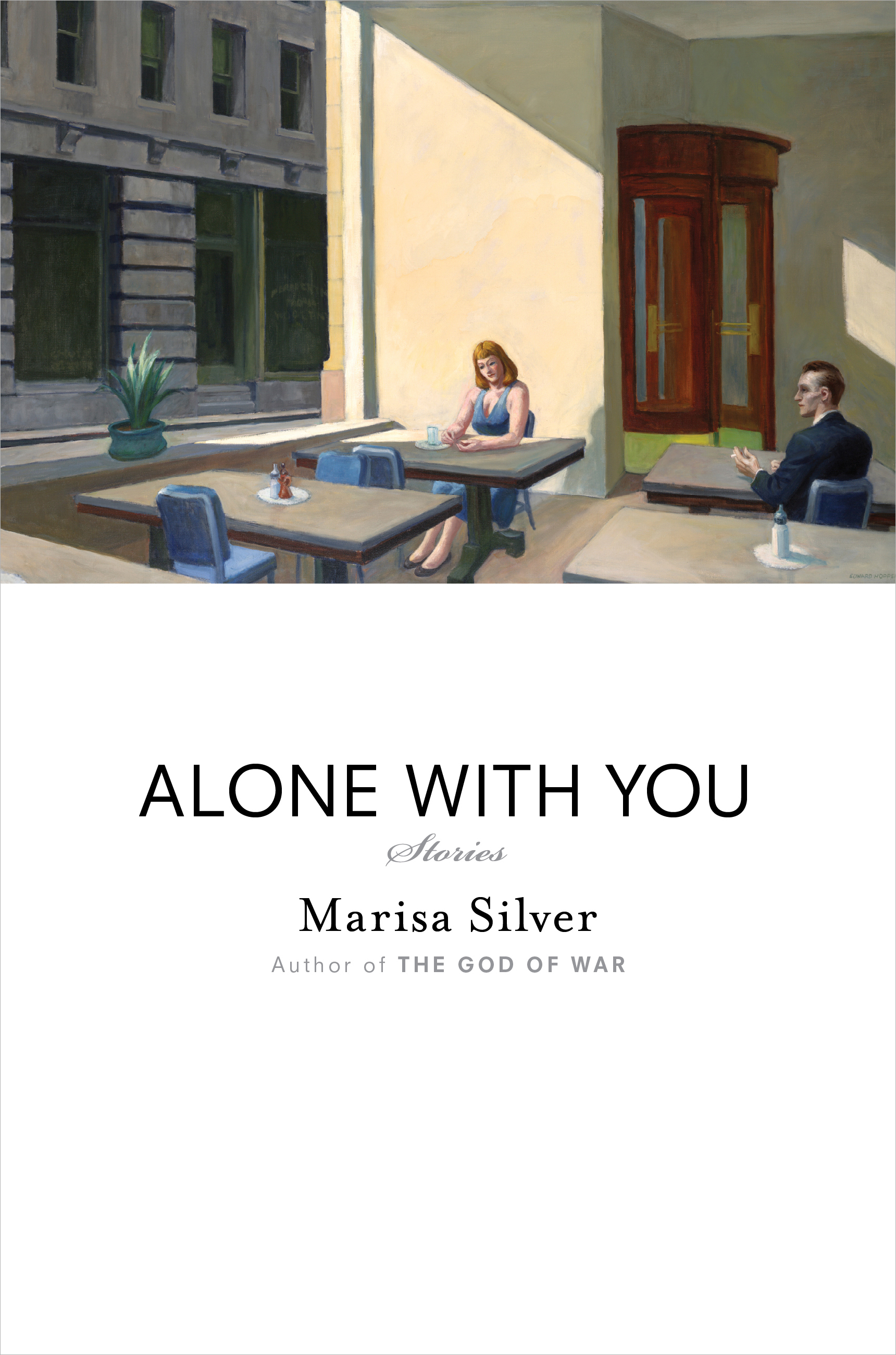 Marisa Silver is one of California's most celebrated contemporary writers…(whose) best stories are prickly and nimble, satisfyingly acute… so good it might give you vertigo.

The wide range of settings and characters in these eight stories attests to Marisa Silver's prodigious imagination…Her style is breezy…its clever snap can be captivating…and Silver's observations can be spot-on.

Alone With You: Stories is one of the most compelling and honest portrayals of human nature written by a (relatively) new author that I have read in a long time. Emotions are treated like the multidimensional and exquisitely complex things they are rather than the boiled down version we are often treated to in contemporary literature. The intricacies of these short stories are so masterfully weaved together that they form a seamless tapestry reflecting raw slivers of contemporary Americana. The harshness of some of the stories is blunted by the skill with which Marisa Silver presents them to the reader.

…a polished, incisive collection…Each of these eight stories drives unflinchingly toward a moment of unexpected and inevitable clarity about the precariousness of the world and the resilience it requires.

Marisa Silver's Alone With You is a triumph for the short story. Funny and surprising and unsentimental, the collection finds in dark situations a persuasive hope. Every story is striking both in its emotional complexity, and in the wry clarity with which it's told.

author of Both Ways Is the Only Way I Want It

Alone With You offers eight extraordinary portraits of life's tender humiliations as well as its sharp, rude jolts. Marisa Silver's virtuosic range seems endless, and yet her ear and heart are in each case mining for a precise kind of undoing: when the fog suddenly lifts and people manage stark contact with themselves, if only for a fleeting moment. These moments are brought to bear with deftness, compassion, and an eerie, unflinching grace.

author of Telex From Cuba

Her new collection (eight stories, three first published in The New Yorker) showcases her uncanny ability to tap into the unsettled nature of our times.

Whether you choose Alone With You or another of her short story collections, pick one up immediately.

The blending of her talents makes for accomplished narrative, delicate but sure, held together by expertly constructed point of view. Tender in her seriousness, refined yet absolutely contemporary and stylish, Marisa Silver is doing something balanced and minutely considered, something very nearly seamless.

Longing swells each of the eight stories in Alone With You, as Silver investigates 'aloneness' and the dear and inevitable distance between people in loving relationships. These stories stand out because of their high tolerance for complexity, never opting for a single note. The situations here don't settle on the neat broad themes of loss or connection, but there are always surprises, nuances, changes of heart.

That our lives unfold before us with a chilling ambiguity and no particular regard for our preferences is the truth that Silver reveals. She does so with a sympathy and affection so wide and deep that when we've finished the book, we want more.

Marisa Silver's stunning new collection Alone With You, a title that holds both the possibility of shared-breath intimacy as well as the most profound kind of loneliness, a subtle foreshadowing of what lies beneath the cover. This reading is not light emotional fare and while her stories are riveting, they deserve slow and concentrated dedication.

…these moments of bleak epiphany and emotional purgatory showcase [Silver's] strengths as a writer.

Short stories to be savored, these are recommended for a wide range of readers…[a] moving collection.

What makes Marisa Silver's portraits of contemporary American life so powerful is her unblinking gaze, her willingness to look imminent disaster straight in the eye. And what makes her characters unforgettable is the combination of bewilderment and resilience with which they navigate this precarious life. Alone With You is a beautiful collection: urgent, clear-sighted, wide-ranging, profound.

Alone With You is heartbreakingly honest, and thus lends itself to reading in multiple sittings. It is her unsentimental style, however, coupled with her fresh language, that makes the collection so profound.

The intricacies of these short stories are so masterfully weaved together that they form a seamless tapestry reflecting raw slivers of contemporary Americana.

Alone With You is a jewel. Actually a cache of many gems, each one complete and powerful in both the feelings that they evoke and the eloquent way in which they unfold.

Alone With You is a stunning collection of eight short stories that will haunt the reader long after the last page.

The stories in Alone With You are portraits of everyday sorrows, but Silver keeps hope alive, even when it's on life support. Her characters often feel powerless, then discover what they can do….Silver makes clear with devastating simplicity, that tendency to change course works to our advantage…If we can adapt, forge new ground on which to stand, we survive….Silver understands this truth and passes it along to her characters with grace and insight as they grapple with change, revelation and the complexities of modern life. These are clear-eyed, unsentimental stories that resound with resilience.

Unwellness is woven through these eight beautiful and brutal stories from Silver (The God of War), who gives readers finely wrought slivers of lives…and the intermingling of hope and despair…Silver infuses her characters with a fatalistic resilience that's revealed through tiny, perfect details.

[In] Alone With You, Marisa Silver explores the impact of collateral damage, whether sustained in war or life…Silver's characters manage somehow to emerge as credible realists, unafraid of the rigors of making do. Even in the darkest moments, their stories are illuminating as they find the courage to face who they are…fierce…brisk and keenly observed.

Alone With You, a collection of wondrous stories by Marisa Silver, will endure. Each story shatters the commonplace with the telling detail that evokes crucial events in human lives. She is a real writer; the breath of life infuses her work.

Newberry Medal-winning novelist and author of Borrowed Finery: A Memoir

A collection of eight stories, all brutally honest, gripping and profound, Alone With You by Marisa Silver brings snapshots of damaged ordinary life to the reader with almost effortless grace.

Alone With You is as satisfying as the perfect meal.

A stunning collection, sad in all the best, thinking ways.

Marisa tells a joke on NPR, then discusses her writing, her dark past as a filmmaker, and her attendance at an exorcism.

Writers Voice spends the hour with fiction writer Marisa Silver, talking about the craft of writing, her new collection of short stories Alone With You and her 2008 novel, The God of War.

Novel Rocket: How to Lose Your Way and Find Your Story

read the article by Wendy Werris

Author Marisa Silver wants to be ALONE WITH YOU

Short Stories: What Do Writers Love About Them?

"We continue our series on the short story, asking writers how they compare writing short stories to writing novels, the demands the story makes on the reader compared to the novel, how the writers chart their own development as story writers, and what can be done to strengthen the art of the story in America."

read the interview by Anis Shivani for the Huffington Post

Largehearted Boy: Book Notes for Alone With You

In the Book Notes series, authors create and discuss a music playlist that relates in some way to their recently published book.

BookBrowse: An Interview with Marisa Silver

BJ Hegedus chats with Marisa Silver about Alone With You